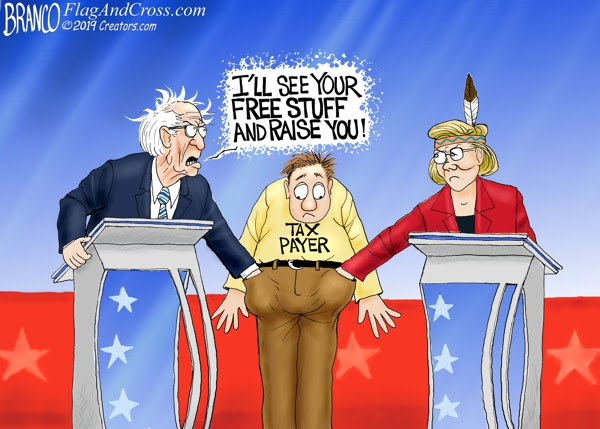 Listen y'all, this is long, but I ask humbly, even in this drive-thru, 10 second society at fault that you try to spare the time to read it because this governor's election is very important in light of the next huge one in 2016 and it took me a long darn time to write it. These thoughts are for the consideration of those who believe in the Republican platform but to those that do not, then you may not want to read this because it probably won't really make a difference and it is SOLELY an expression of my thoughts and I am an unpaid nobody, who researches and finds comfort in writing and just really understands that you cannot flirt with the growth of government, to any degree, for long, before you become slaves to it and with every vote, I try never to lose sight of that. 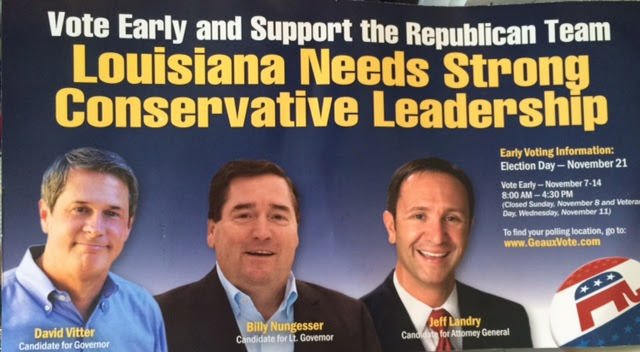 TEA PARTY of LOUISIANA (TPoL) Endorsed and Recommended candidates on your Nov 21, 2015 Ballot

1st and foremost GO VOTE!!! We can't change this mess unless YOU VOTE and Vote Correctly!!!

David Vitter, Governor  - TPoL endorsed !!!! We need a proven conservative to fight every battle to maintain our states’ Rights against this overbearing Federal Government!!! Fight Common Core and bring every conservative value entrenched in the founding of this country into perspective on every legal issue facing Louisiana in the trying time of today and the future! David is that proven conservative and has the track record to prove it! Our alternative is to elect an Obama like Governor and put his party back in charge of Louisiana again with a John Bel Edwards.

Billy Nungesser, Lt. Governor  - TPoL endorsed !!!! A proven Louisiana patriot!!! Our alternative is to elect a Obama like Lt Governor and put his party back in influence positions of Louisiana again with a proven secularist like Kip Holden and his "One Baton Rouge" program.

Jeff Landry, Attorney General  - TPoL endorsed !!!! We need a proven conservative to fight every battle to maintain our states’ Rights against this overbearing Federal Government!!! And bring every conservative value entrenched in the founding of this country into perspective on every legal issue facing Louisiana in the trying time of today and the future! Jeff is that proven conservative and has the track record to prove it!

BESE Districts - One of the most IMPORTANT of your local elections especially after the results of the primary in the other Districts in order to STOP Common Core or at least have some opposition to it in the out of control BESE board!

Please DO NOT BELIEVE THE LIES ABOUT THESE CANDIDATES IN THOSE EXPENSIVE MAIL OUTS PAID FOR BY THE COMMON CORE COALIATION - BIG MONEY TRYING TO BUY THE ELECTION OF THESE LAST 2 POSITIONS ON THE BESE BOARD WITH THEIR LIES AND SMEAR CAMPAGIN - DON'T FALL FOR IT AND MAKE SURE OTHERS KNOW IT ALSO!  YOUR CHILDREN'S MINDS ARE AT RISK!!!

The following are the TPoL endorsed candidates in their respective districts. The following candidates are advocates against Common Core and Federal control of our local schools!

Other Races very Important to getting anti-Common Core, smaller government, less spending, no tax candidates are:

Lenar Whitney, State Representative District 53  - TPoL endorsed for re-election!!!!! Lenar has a proven conservative record and fights for the people and less government, less spending and NO TAX increases! She was the number one conservative State Representative based on her voting record in the 2015 La Legislative Session where they passed 3/4 a Billion $'s in new Taxes on Louisianans. She is a staunch supporter of STOP Common Core.  Now you know why the Fascists are spending so much money on an opposition candidate to help remove her from the legislature for the next term.  Don't let them succeed - RE-ELECT LENAR WHITNEY State Representative District 53.

Rick Edmonds, State Representative District 66 - TPoL endorsed!!! Great new conservative blood to displace incumbent Darrell Ourso a staunch supporter of Common Core and no one whom you would want to represent you - A tax and spend Crony capitalist! Help us get the right candidate in and kick the wrong one out onto the street where he belongs!!! (NOTE: We must remove the Crony Capitalist incumbent - Darrell Ourso - who also voted for all of the $700+Million in Tax increases and only by your voting for Rick Edmonds can we do this!)

Following are local election candidates TPoL suggest you vote for as the best possible candidate:

NOTE:  To Print Out Your Sample Ballot  -  Click Here

We have 49 guests and no members online